Thanks to the Mutchilba community, fronted by Cr Nipper Brown, we were welcomed to the community centre to conduct the November General Meeting for the group.

This year we were privileged to receive reports and comments from a wide range of speakers. The Committee would like to thank all speakers for their contributions and look forward to future opportunities for collaboration.

Tilapia in the Walsh

Earlier in the year we were able to support an enthusiastic Year 8 student, Joe Kay, who undertook a project on Tilapia. A keen fisherman and champion of riparian health, Joe was alarmed when reports of Tilapia in the Walsh surfaced in late 2017. In his quest to make a positive contribution, he connected with long-term environmental educator Neville Simpson and the Tinaroo Environmental Education Centre.

Supported by Neville and his Mount Molloy school teachers, Joe undertook a consultation to find out what was most important to his fellow students. Joe researched 47 native fish species and charted their breeding habits, habitat, and ecological attributes. This allowed him to make predictions for which native species would be most impacted first should Tilapia continue to multiply in the Walsh.

According to Neville, who was able to present to the meeting on Joe's behalf, the project has gained attention from school leaders across the region due to Joe's passion, command of the facts, and his ability to communicate with fellow students. Joe produced a survey on knowledge and attitudes toward riparian values which he has presented to most of the primary schools along the Walsh. The survey accompanies an information/fact sheet on Tilapia which he also produced.

Moved by this young man's achievement, the Mitchell River membership voted to offer support to help Joe continue his work. Chair Allan Holmes indicated that the Executive will be talking with Joe and Neville in the near future to come up with options that best suit.

Projects in the Barron 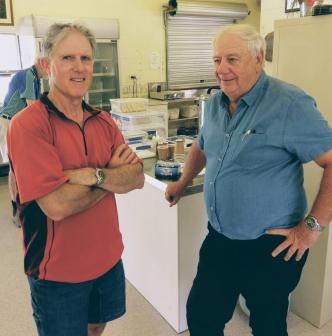 We were joined this year by Rod Marti, Coordinator of Barron Catchment Care. Although not quite as old as the Mitchell River group, our neighbours to the east have earned quite a high profile as a forward-looking, highly effective advocacy and action group caring for the Cairns region's most iconic watershed. Rod gave us a bit of background on the group's distinguished Board members, and also outlined his own impressive history in local politics.

Barron Catchment Care have 4 major projects at the moment. Rod gave some dotpoints on the top 2.

Most people in the region would be aware of Reef Rescue projects. BCC have the contract for stormwater mitigation, and this includes everything from painting storm drains to remind people that storm water in the city is connected to the reef, to dealing with runoff damage in agricultural areas, to setting up settlement ponds with native fish and plants as a way to compensate for poorly-planned subdivisions.

In another attempt to set right poor decisions of the past, BCC are also involved in a water efficiency project that offers a contribution toward farm re-design. By re-designing a horticultural property, a manager can gain (or re-gain) advantages of smart contour layout, mixed cropping strategies, and methods for aggressively improving soil health. All this adds up to significant improvements in water efficiency (good for the Reef and reduces the demand for irrigation infrastructure), and it delivers direct productivity gains to the farmer.

Barron Catchment Care holds meetings on the second Tuesday of each month at the CSIRO facilities in Atherton from 10:00 til midday. All are welcome to attend. (photo: Rod Marti and Allan Homes enjoy a cuppa after the meeting)

Bellyache Bush on the Palmer

Trevor Meldrum Coordinator of Cape York Weeds & Feral Animals, presented apologies from the Chair, Vincent Harrigan. Trevor then gave a report on progress with a small grant from Northern Gulf to re-survey past work and undertake additional control work on the BAB infestation that has been targeted for the past 6 years.

Trevor said that we cannot underestimate the damage that bellyache bush (Jatropha glossifolia) is capable of inflicting on the Palmer and Mitchell. A good start was made on controlling the infestation in the Palmer but since that early success the funding to continue work has steadily declined. "It makes no sense to stop funding," Trevor empahsised. "If we can keep the pressure on there is a good chance we can get rid of this weed and prevent future generations from having to spend millions to clean it up or just lose their land entirely."

The delimiting survey showed that previous control lines were holding. Very minor regrowth was found (and treated), ensuring that even these small re-shooting locations were deprived of further vitality. Trevor recounted the history of efforts in the area, including aerial spraying and using biological controls. Although there are advantages and problems with each approach, the current method of basal barking and application of a non-persistent herbicide ha proven to tbe the most reliable control strategy.

Under current biosecurity legislation, managing bellyache bush is a landholders' private "biosecurity obligation." While this might seem justifiable, in actual practice most land managers cannot deliver the levels of control that are required. "Most of these fellas are flat out putting tucker on the table," Trevor explains, "they simply don't have the resources or profit margins to cover the cost of managing weeds like this."

Senior Elder Eric Rosendale provided some observations from Bonny Glen, which traces the northern edge of our catchment. From the homestead at Bonny Glen you can almost look down from the Byerstown Ranges to see Lakeland in the distance. All of that country is eastward flowing waters of the Normanby, whereas back on Bonny Glen the Palmer takes shape and heads west.

Eric is a lawman and Traditional Owner of the country Bonny Glen is pegged from. Over the course of nearly 15 years, the pastoral lease for the property has been secured and transferred to the management corporation, Gummi Junga. This corporation comprises the three families who look after that country. Pastoral operations provide the main source of ongoing income, but the area has a long history of being a very important mining district.

The impacts of mining have been accumulating over the years. "We used to walk down that river and catch fish at waterholes the whole way," Eric recalls. "Now you can run a quadbike right down the river and there's no water at all." The change may be caused by an accumulation of impacts from mining operations. Most miners do the right thing and maintain good relations with the Bonny Glen crew. However, the cumulative impacts are not being closely monitored.

Eric noted that there had not been any further discussion over a proposed dam at Mammoth Bend to supply water to the Lakeland agricultural district. The findings of the NAWRA assessment for the Mitchell were released in October, but the feasibility study that was managed by Cape York Sustainable Futures has not been released. 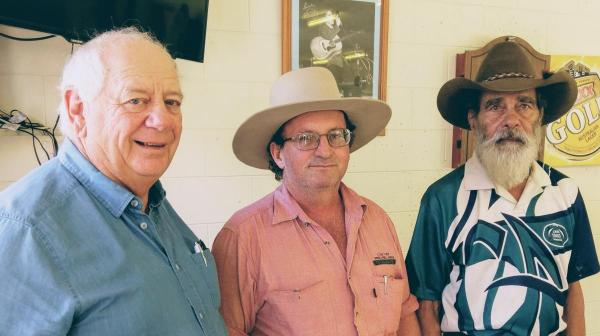 Brian Prove has been working for the past year on developing a better picture of the water table and salinity at Arriga Plains. This broadscale flat to the west of Mareeba attracted attention over two decades ago when it was first proposed to pull down the paperbark and ti-tree country to make room for irrigated agriculture. Predictions were made of rising water tables and accumulation of salinity, but these concerns went largely unheeded.

Rice was the first crop to go in, using flooded paddock techniques, but this was quickly abandoned. Sugar cane was then taken up by a patchwork of smaller farmers who managed to coax reasonably profitable crops out of the are for the next decade and a half. These farmers used flood techniques for irrigation, although a few operators invested in overhead or drip systems. A period of consolidation began and now a single corporate operator is the major landholder in the area.

The DPI/DAF originally set up a network of approx 180 monitoring bores to enable accurate time-series data to be collected across the district. This data was used to monitor the water table depth as well as a range of characteristics about water and hydrology on the area.

However, with political changes and imposed budget cutbacks, this network of monitoring points was left in neglect. Farmers no longer had access the data or interpretation that would help inform them of any trends that might be developing.

In 2017, with funding provided by Northern Gulf Resource Management Group, Mitchell River contracted Brian Prove to see what could be done to improve the situation. By discussing matters with the cane growers, Departmental staff in Mareeba, and expert agronomist working with the Tablelands Canegrowers, Brian was able to achieve a number of important advances. Thiese included:

Finally, Brian is using the last remaining funding to undertake a second bore run so that comparative readings are available. The Arriga Plains project page has more information on the project.

The meeting wrapped up with congenial chats and lunch provided by the good folks at the Mutchilba General Store. Special thanks again to our speakers and visitors who travelled in to make the event. A great meeting and we're all looking forward to a year of progress ahead.